Awards winners at AC 2017 inspire many

/
News
/
Awards winners at AC 2017 inspire many
By: Doreen Gosmire 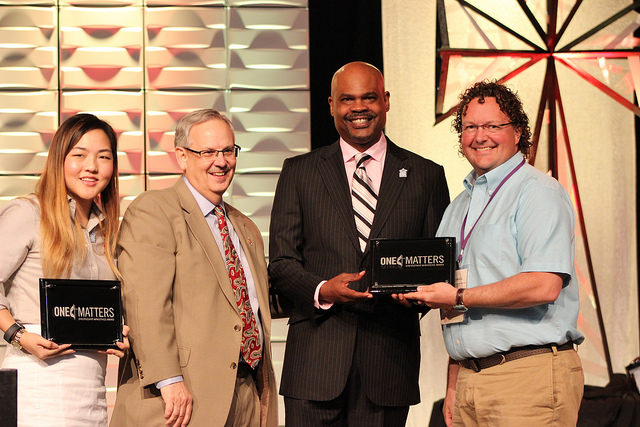 The One Matters Award is offered through Discipleship Ministries of The United Methodist Church.  The award recognizes churches in each conference that are turning zeros into positive numbers with a renewed focus on discipleship. Two churches, one from North Dakota and one from South Dakota received the One Matters Award on Thursday, June 8 during the opening plenary session.

One Matters Award recipients were, Camp Crook United Methodist Church and Center United Methodist Church. Camp Crook is a small town in northwest South Dakota, located near the juncture of North Dakota, South Dakota and Wyoming. The population of Camp Crook is 63.  Despite the isolated location of this small church and the lack of new people moving in to the area, Camp Crook UMC is growing in attendance. This past year they celebrated three baptisms and one profession of faith.  The last baptism at Camp Crook was in 2008 and that was the only baptism in 20 years.

Center United Methodist Church in Center, North Dakota. Just before being appointed to Center UMC, Pastor Cory Thrall had been asked to do a pulpit supply there. That morning there were only three in attendance—including Pastor Cory!  A short time later, when he was appointed to Center UMC, as a part of the Missouri Valley Parish, Pastor Cory was told by the board that he was likely sent there to close their doors, to which he replied, “God’s not done with Center UMC.  This is still hope!” That original two in worship has grown to 50 in attendance on Sunday mornings and they celebrated their first baptism after a 10-year drought.  Center UMC has transformed from being a dying church to a place where God's love is felt and seen 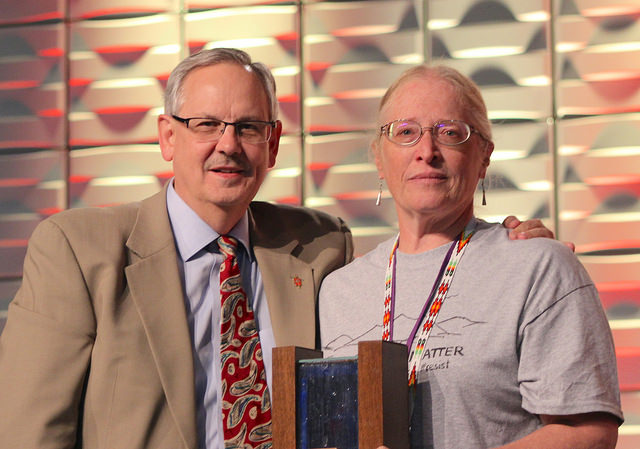 The Streams of Justice Award is awarded to a ministry, churches, and individuals in the Dakotas Conference who has as its main purpose to extend justice to a group, program or ministry that connects across racial, cultural, socio-economic or other lines.  A cash stipend of $500 will accompany the award along with a copy of the “Poverty and Justice Bible” (with passages highlighted in orange) from the American Bible Society. Photo: Bishop Bruce R. Ough, resident bishop, congratulates Pastor Susan Jennys, 2017 Streams of Justice Award winner.

Pastor Susan Jennys and the Morningstar Fellowship are the 2017 recipients of the Streams of Justice Award. Morningstar Fellowship is an outreach to Native Americans in the Sioux Falls region, makes contact with Native Americans through sacred conversation in the informal setting of morning coffee. The nomination stated, “We who are called to greet the stranger, love our neighbors and to treat all people with same respect and dignity we would wish to be treated with, and to be active in breaking down the dividing walls that separate us.”

The Youth Worker Hall of Fame honors an individual who has committed to serving at least twenty years to Jesus Christ through youth ministry.  The 2017 recipient, Rev. Kris Mutzenberger, Sioux Falls Sunnycrest.  Mutzenberger has spent many years at the conference, district and church levels leading youth ministry.

The Dakotas Conference Council on Youth Ministry (CCYM) selects the recipients for the Youth Worker Hall of Fame and the Darrell Leach Youth Worker awards.

The Darrell Leach Youth Worker award 2017 recipient, Pastor Teresa Whetsel, Arlington / Lake Preston UMC. The award honors someone who is currently serving in the leadership of youth ministry.  “You have made a difference in the lives of youth to grow in their faith and walk with Jesus,” said Katie Clark, CCYM president. 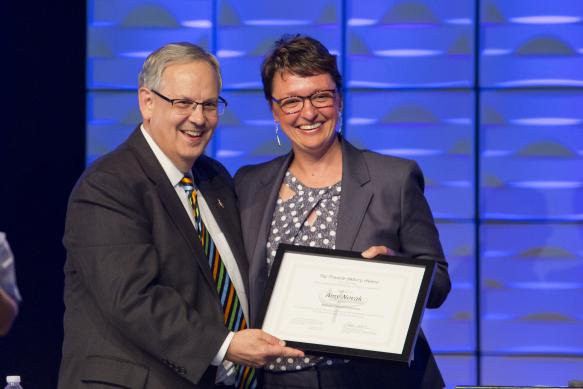 The Francis Asbury Award for fostering United Methodist Ministries in Higher Education was awarded to President Amy Novak, president of Dakota Wesleyan University in Mitchell, South Dakota.  The award recognizes individuals who have made a significant contribution to fostering the church’s ministries in higher education at the local, district or annual conference level of the church.  The award is named for Bishop Asbury and is based on his admonition to the people called Methodist to erect a school in the vicinity of every church. The Asbury award is administered by the General Board of Higher Education and Ministry. Photo: Bishop Bruce R. Ough (left) congratulates Dr. Amy Novak, president of Dakota Wesleyan University as the recipient of the 2017 Francis Asbury Award.

About six years ago, conversations and dreams began to emerge from the campus pastor and the local First United Methodist Church to start a new worshipping congregation that would reside on the college campus. President Novak was incredibly supportive of this creative and innovative new church start—Fusion Church, on the campus. Her guidance, support, and wisdom were integral to a successful launch. Even as the church went through subsequent pastoral and campus ministry leadership changes, Novak has remained committed through time, leadership and resources, to making this collaboration a success.

The Harry Denman Evangelism Award program honors United Methodists in each annual conference whose exceptional ministry of evangelism – expressed in Word (what), Sign (why), and Deed (how) – brings people into a life transforming relationship with Jesus Christ.

Pastor Mark Tracy and Pastor Holly Sortland were the 2017 clergy recipients of the Denman Award.  Tracy, serving Clark / Garden City United Methodist Churches has committed himself to a hands-on ministry that seeks to capture the heart of others for Christ.  Her and his wife, Joy, have begun many unique ministries and small groups including a group that meets on Sunday evenings at a local pub.

Sortland, pastor of discipleship at Rapid City Canyon Lake UMC, has a heart for the least, last, and lost of God’s people, including developing a strong relational presence with Native people.  Sortland started “Waffle Church” at Canyon Lake UMC last summer.  People from all walks of life, especially those often ignored or rejected, attend.

Susie Heidt, Tuttle United Methodist Church, and Julia Jones, Pierre First UMC received the Denman Award for Laity. Heidt has for years planned and organized a Vacation Bible School and a Christmas program that regularly attracts 40-60 children from pre-K - 6th grade and involves over 30 volunteers from youth to senior citizens. Tuttle, North Dakota has a population of 80.

Jones has a passion for mission and evangelism. She is the leader for an annual medical mission trip to the Dominican Republic.  Jones has helped to expand this ministry to people beyond the walls of the First United Methodist Church of Pierre, and has invited other people from throughout the Pierre and Ft. Pierre communities and the Dakotas Conference.

Alec Paulson, Watertown Cornerstone UMC, was awarded the 2017 Denman award for youth.  Alec and his family host one of Cornerstone’s youth small groups; about 25 consistently attend the group. Paulson has also gone on his church’s mission trip to the Pine Ridge Reservation several times and encourages other students to come.