NCJ elects fourth bishop and says goodbye to four others

PEORIA, IL July 14, 2016 -- Thursday at the North Central Jurisdictional Conference was a time of celebrating leadership. Prophetic voices were heard during morning worship and in the afternoon episcopal address. The fourth bishop to be elected was coming to the stage at mid-day. Then business closed in the afternoon with a fond farewell to faithful episcopal servants.

The Opening Worship featured a sermon by Bishop Hee-Soo Jung (Wisconsin). His message, “Living Together Amidst Diversity” drew on personal, historical and biblical examples of the call to love one another in spite of differences. “The yin and the yang are not divisions between you and me, but aspects of each of our lives.”

The Rev. Laurie Haller of the West Michigan Conference was elected on the third ballot of the morning. She currently serves as the Senior Pastor of Birmingham 1st United Methodist Church. During morning hours four nominees stepped aside thereby hastening election.

Upon receiving her episcopal pin from retired Bishop Ann Sherer-Simpson, Haller said, “I am the first bishop ever to be elected with a visible black eye.” Nichea Ver Veer Guy, chair of the West Michigan Conference Delegation noted, “I am excited that everyone else now gets to discover the Laurie Haller we all know and love. I am just so proud of the way she and all the delegates have handled this. It is such an example for us.” She is the latest in a string of women elected from the West Michigan Conference, beginning with the historic consecration of Bishop Marjorie Matthews in 1980. Matthews was the first clergywoman to enter the episcopacy of The United Methodist Church. 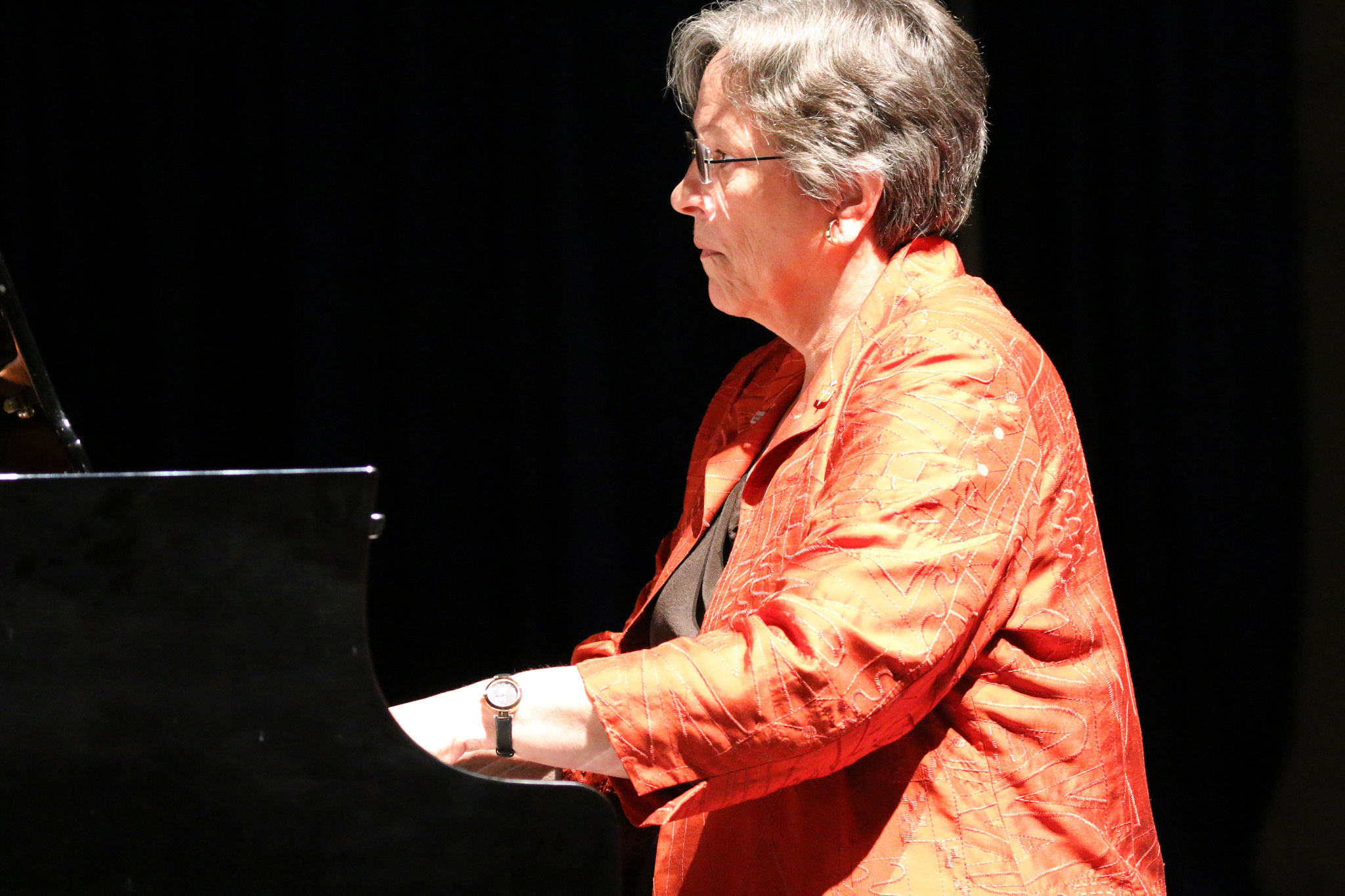 l Address moved from pulpit to piano as Bishop Deborah Lieder Kiesey addressed the chaos and fears experienced by individuals and the church in this day. During the times of disquiet permeating life, “I seek something deeper,” she said. While a lover of words, Kiesey admitted that “I need something more visceral in these uncertain times.”

Because she “hears Jesus’ words in a new way” through music, the bishop offered her audience some guidance on listening to what was to come. “Listen in light of what our church is going through,” she began then described a miracle revealed through music: “You can have two separate notes that occupy the same space, very different but you don’t lose their uniqueness,” she said. “And together they make us richer as one enhances the other.”

Saying, “Maybe music can touch those invisible parts of our hearts and souls and teach us what God hopes for the world to be,” Bishop Kiesey prepared those in the hall to appreciate the piece she would soon play, the second movement of Beethoven’s Sonata #7 in D major. “The piece begins with struggle, frustration and fear, something we all know too well,” she said. Then in benediction she concluded th

Words-portion  of her message with: “Then part way through you begin to hear a quiet beat with the left hand … As you listen may you hear your story in this music. May you believe that the God who brought you this far will continue to hold you. May you find hope and peace.”

Find the text of the message here. 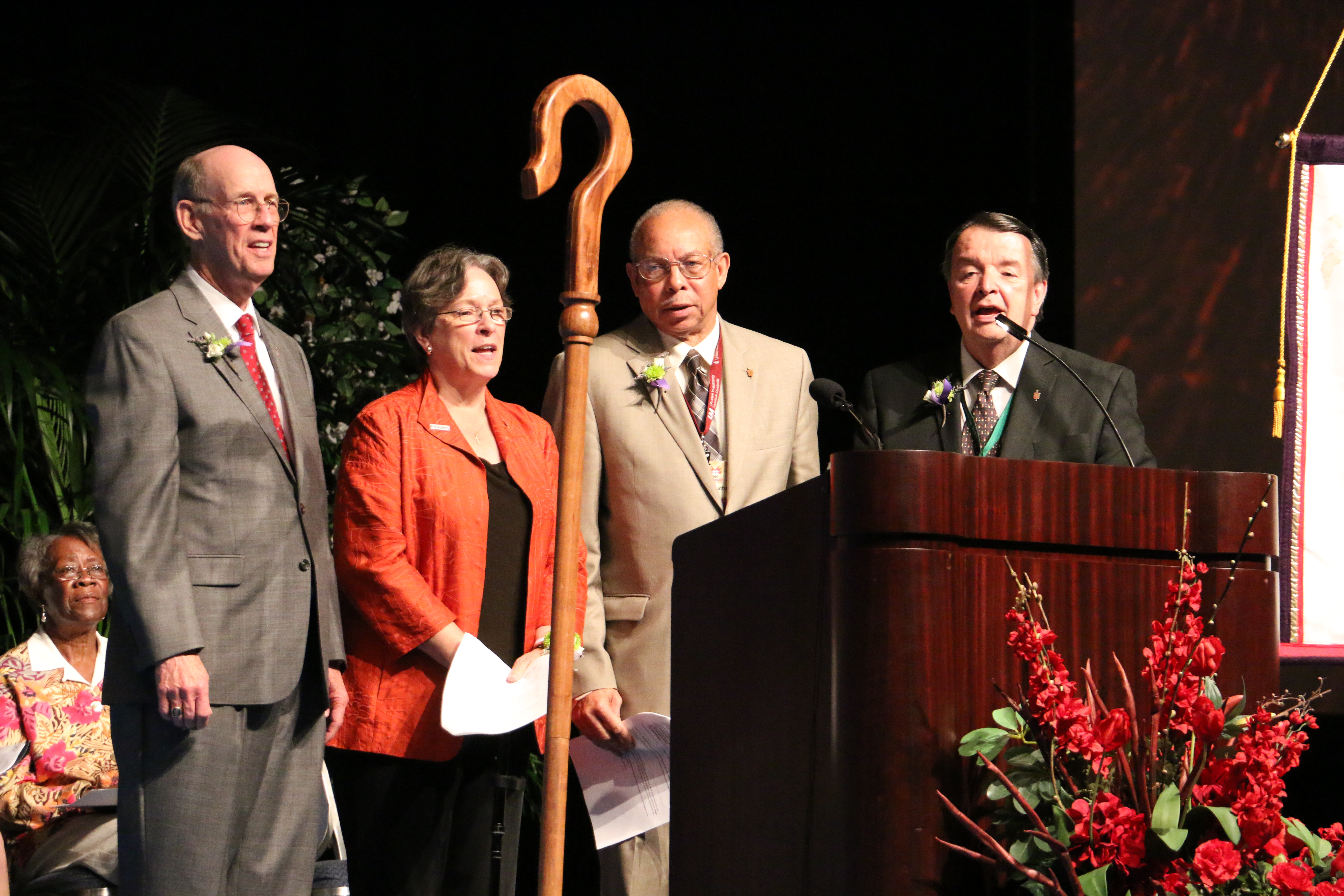 Conference-produced videos prompted laughter, memories and reflection from the gathering. The gratitude and well wishes continued from colleague bishops, the NCJ Committee on the Episcopacy and others. Bishop Sharon Rader reminded the four, “No one ever retires from ministry. Continue to be true to your baptismal calling.” She thanked them for their servant leadership and added, “Never think lightly of the great good God has brought through you,” she continued.

An offering was taken for Imagine No Malaria to be given to that global cause. Earlier in the afternoon Rev. Gary Henderson, INM champion, expressed gratitude to the North Central Jurisdiction for giving 23% of the total contributions to the initiative since the effort began in 2008.

Dr. Maggie Jackson, Chair of the Episcopacy Committee presented wooden boxes made beautiful by the lids made beautiful by the inlay of the NCJ map but also by the letters of remembrance they contained. “It is our turn to give to you,” she said. “We want you to know that you are special.” Jackson was thanked for her service. During the course of the 2016 Conference she had the privilege of welcoming each new bishop to his or her role and of thanking retirees on behalf of a grateful region.

Recognition of Retirement Service from Dakotas UMC on Vimeo.

Other action of the day

Time was spent in debate and action on a resolution brought by the Northern Illinois Conference. The focus of the proposal was the Bishops’ Way Forward. Final action on the resolution and reporting will be done Friday, July 15.

Bishop John Hopkins announced that Bishop Gregory Palmer will be the President of the NCJ College of Bishops for the coming four years. 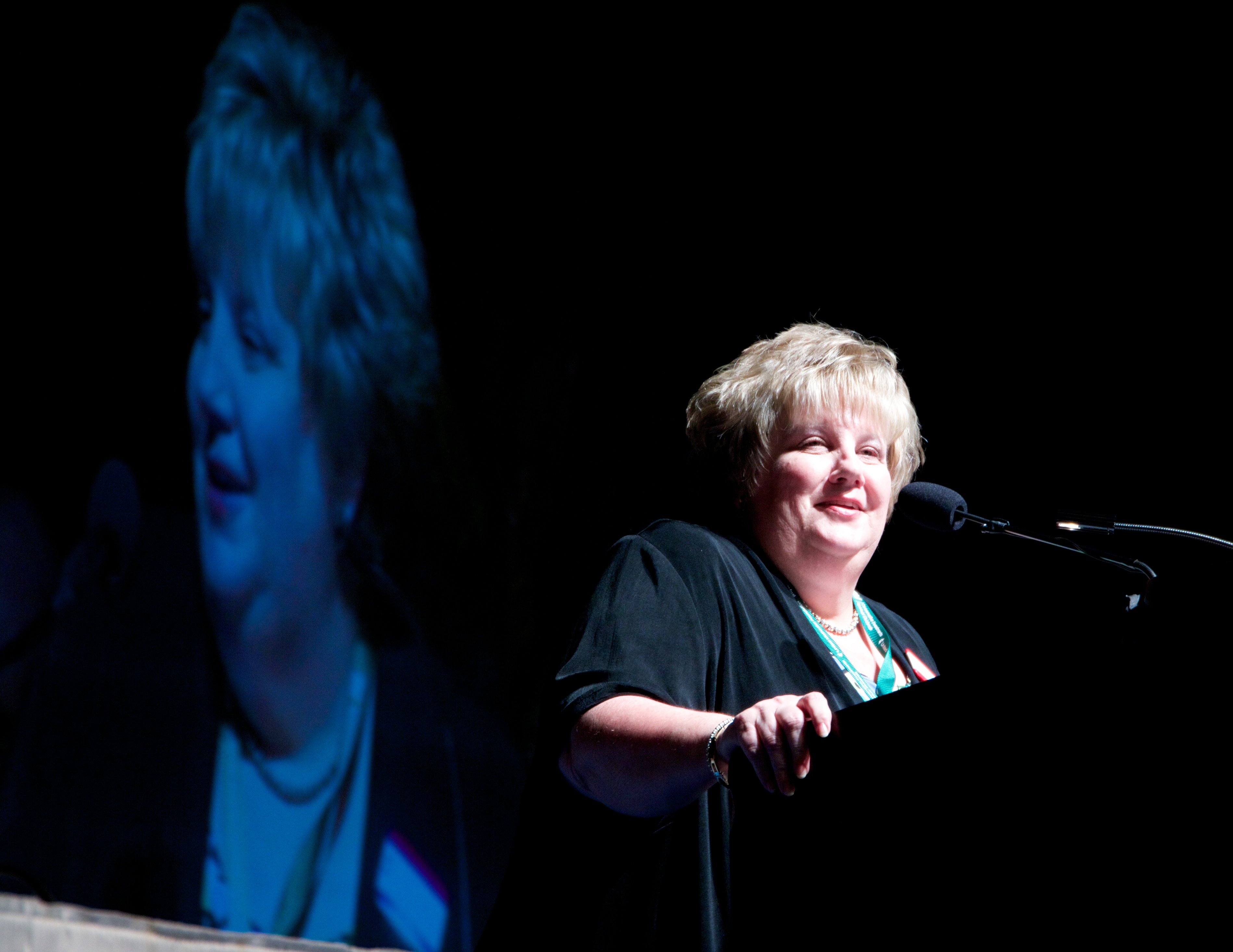 The Marsha Woolley, Detroit Conference Delegate and Co-Chair of the Michigan Area Design Team, presented motions to enable the state’s transition from the Detroit and West Michigan conferences to the Michigan Conference.

“A year ago over 90% of conference members decided to get engaged,” she said. “And we have had a good first year together.” The NCJ delegates affirmed the creation of a new Annual Conference with boundaries defined as the entire state of Michigan. They also approved that the Michigan Conference will be effective no later than January 1, 2019. Woolley continued, “Many of us have been calling ourselves one ever since getting together and we wear this button to signify that.” She noted that “someone from this body will become our bishop in September,” she gave Bishop Gregory Palmer, presiding over the afternoon’s business, a pin to pass along to the bishop so designated.

With elections done leaving the evening free, the Secretary of the NCJ, Paul White, told delegates they need not return to the Civic Center for an evening session. A Peoria Under the Stars dinner brought July 14 to a festive close.