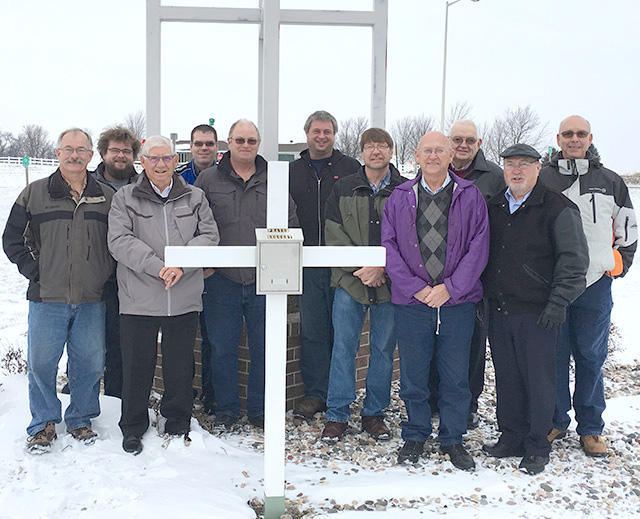 Members of the United Methodist Men at Beresford Zion UMC gather around the cross they built near the church bell tower. The cross holds a box where people can drop off their prayer requests. Photo courtesy of Beresford Zion UMC.

Each month the United Methodist Men meet for a monthly breakfast with a devotion. One month, Courney Carnes focused the devotional on an article from the Interpreter magazine about two churches in California that had built a prayer cross.  The members at Beresford decided they could do someting similar.

The men built the cross to invite people to drop off their requests for prayers. There will be a container attached below the mailbox containing paper and pencils to make it easy for anyone to write a prayer request. People are encouraged to write their requests and drop them in the mailbox.

"This was a step forward for our group," said Jerry Hill, Beresford UMM president. "We have been an active group but mostly in giving, fellowship and devotions. This is a hands-on activity that is really calling us to serve the community in a different way."

Members of the congregation check the mailbox several times a week and gather the requests to remember those individuals in prayer. There have been over 20 volunteers so far to gather the prayers and pray.

Prayer brings people together regardless of who they are, what they look like, and even if they are not churchgoers. The prayer cross is a way for people to feel connected and reassured there is someone out there who cares.