Delivering the Love of the Kingdom to Over 400 Kids

/
News
/
Delivering the Love of the Kingdom to Over 400 Kids

408 kids rocked the house at Embrace Church in Sioux Falls, South Dakota June 24-27, 2013.  The sanctuary was decorated as a medieval castle where God’s kingdom was lifted in glory to the sounds of children singing and dancing.

Last year, Embrace had around 150 kids attend vacation bible school.  This year there were 408. How did that happen?  "We decided several months ago that we were going all out and that our attendance goal would be 400 kids. We wanted to tell even more kids about Jesus,“ stated Travis Waltner, Executive Pastor at Embrace.

The months of planning paid off.  Eight adults began planning and designed the four day program around the theme “The Kingdom Rock:  Where Kids Stand Strong for God.”   The crew, in addition to more than 100 volunteers, moved the chairs out of the sanctuary and set up a medieval castle throughout the church.

Knights in armor, princesses and queens flowed through the castle.  “There was such a happy mood.  Everyone, both kids and adults, enjoyed being there.  It was a lively group ready to be there to worship Jesus,” described Heather Berg, Children’s Ministry Director at Embrace. 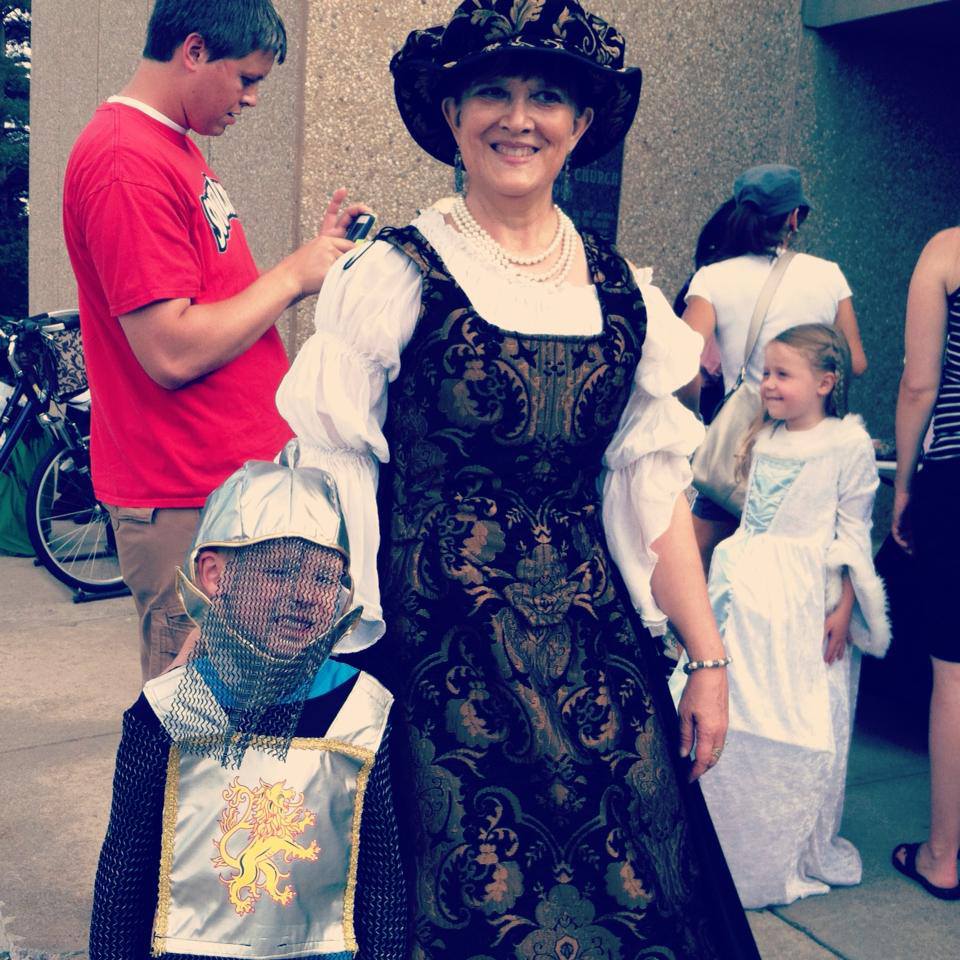 The week started with a Medieval Carnival.  The outside festival included a castle bouncy house, medieval costume dress up station with a chance to get a picture snapped, jousting with pool noodles, and a maze.  Berg noted, “It was such a fun way to kick off the week!”

The planning team from Embrace invited the Renaissance Festival Association from the Sioux Falls community to come and be part of the festivities.  They came in full costume.  “The kids loved it.  It really helped them get into the whole medieval theme,“ said Berg.

Each day began at 6 pm with worship.  Pastor Travis exclaimed, “I have never seen the sanctuary so full of life.  It was electrifying!” 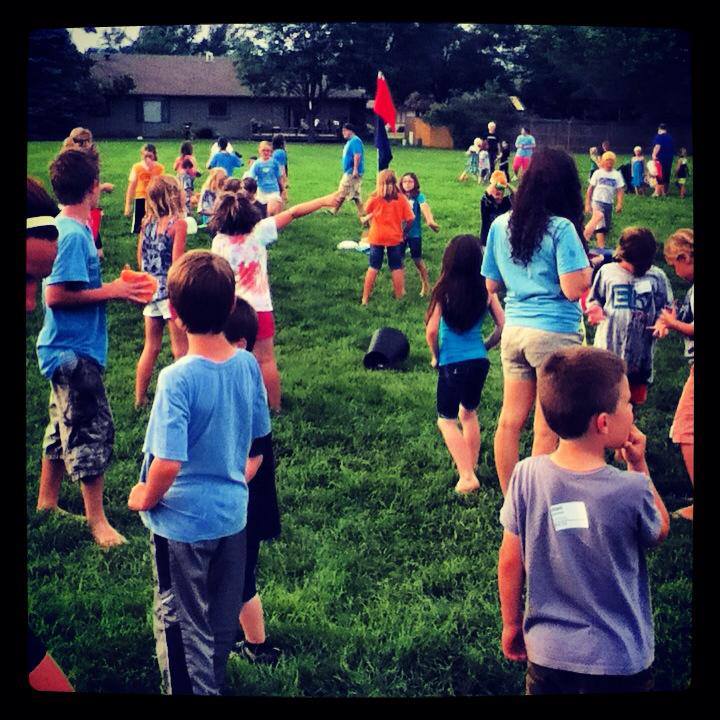 After worship each child rotated through stations 15-20 minutes long.  For example, at the station King’s Kitchen and Chatters Theater kids enjoyed snacks of “heart tarts” and other medieval treats, while viewing a short video.  Bible Adventures highlighted a bible story through drama and imagery.  The Imagination Station was designed for preschoolers to create crafts such as a paper chain of people standing strong for God.  Elementary age kids enjoyed the game Rowdy Ring Toss where they tossed hula-hoops around people in the Outdoor Adventures area.

Children ended the evening by gathering for worship in the sanctuary.  Stand Strong became the favorite song of the week.

The highlights for Heather Berg, who has been the Director of Children’s Ministry at Embrace for less than a month were, “Watching everything come together—all the hard work that the children’s team has put into it and seeing the last night worship.  At 7:40 pm on Thursday, music was playing and kids started worshiping themselves. We let them lead and it was powerful!”

The offering for the week went to the one of Embrace’s Haiti Missions effort, which will build a school in Haiti.  Buckets with the names of four of the adult leaders were placed in the entryway of the church. The children were told at the beginning of the week, whoever had the most money in their bucket would get a pie in their face. During worship on Thursday, all four got a pie in the face.

Jousting, pies in the face, and a medieval castle were all part of the scene to bring 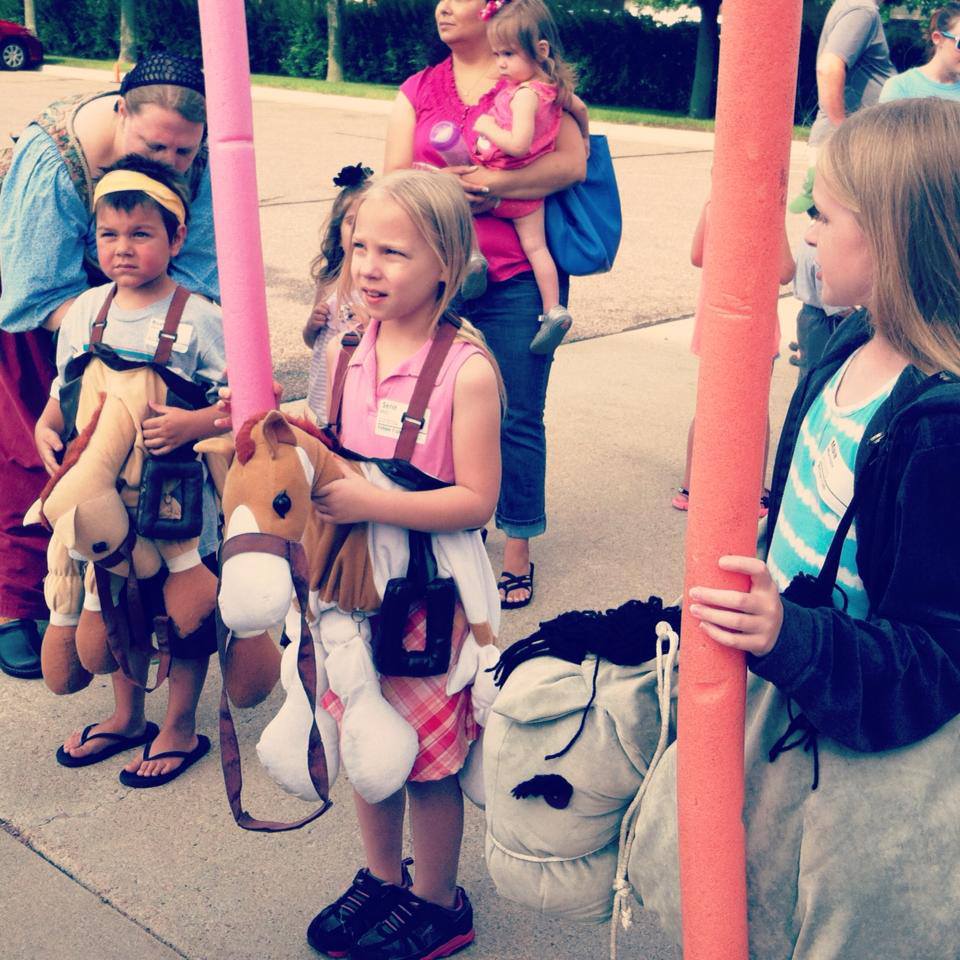 the word of Jesus to many who had not been through the doors of Embrace Church before this vacation bible school experience.