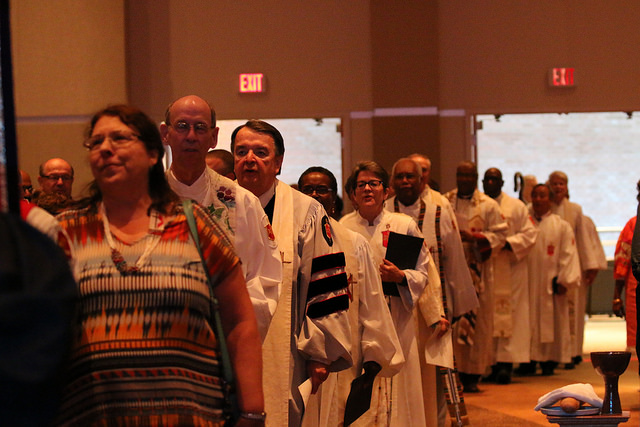 Photo: The North Central Jurisdiction College of Bishops process into opening worship on Wednesday, July 13 at the Civic Center in Peoria, Ill. Photo by NCJ communicators.

After opening prayer, led by Bishop Sharon Brown Christopher, retired, a time of remembrance and 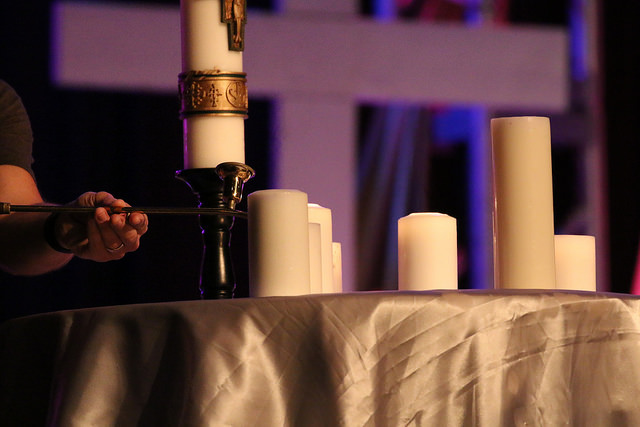 Photo: A candle was lit in remembrance of three bishops and four bishop spouses who have passed away since 2012 at the opening worship of the North Central Jurisdiction in Peoria, Ill.  Photo by NCJ communicators.

“Love your neighbor as yourself.  And who is my neighbor; everybody,” said Bishop Jonathan D. Keaton, resident bishop, Illinois Area during the message, “A Plea for Unity.” “Can we all get along is another side of Jesus’ command to ‘love for God and love of neighbor?’ The behavioral question plagues our communion. “ 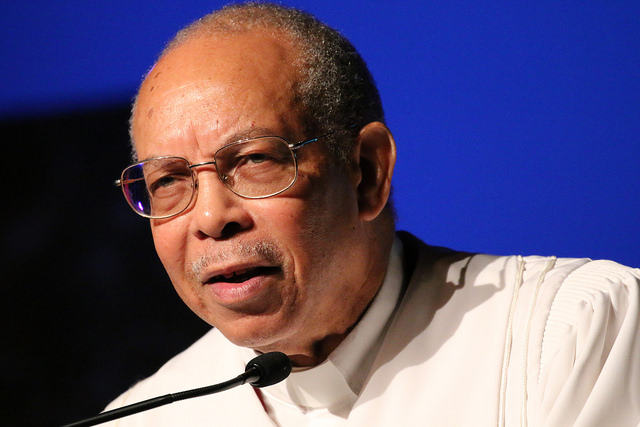 Recalling a recent experience with an enthusiastic young woman whose vocation is forensic science, Keaton stressed that we are all called. “We are all called,” said Keaton. “What is your call and are you following?” He asked those present to, “Live our lives according to God’s call or the commitment to be faithful unto death.”

Young adults, age 18-34 have a lot to say about what they would like to see in the church. Keaton read an excerpt titled “Statement on Unity” drafted by over 300 young people from 34 countries attending the Global Convocation for Young People in Manila, Philippines. The statement was read during contentious debate at the 2016 General Conference. “First, young people don’t want a divided church, specifically a schism; don’t want our church to focus only on the issues that divide us,” said Keaton. “The church that we have taken our places in is called to a ministry that includes so much more than one issue, our young people said.  Some young people believe we can be of one heart though not of one mind; they want solutions that promote Global Unity.”

God’s church is not a one-issue church. “Paul had to model this behavior in his leadership of a divided church. For better or worse, striving for behavioral unity, marinated in the love of God and neighbor took priority over simmering concerns, hurts and inequities in the body of Christ,” said Keaton. Keaton reminded those present about Paul’s Damascus experience that led him to be “Like a prisoner of war, he was never the same.  As a result, Paul brought all his talents to bear on the mission of Christ and his church. “

Jesus shows up in humility and persistence. Keaton reminded the audience that Jesus was, himself, a young adult. “Remember that young man who walked into his home synagogue? They ran that young man out of the church.” Keaton concluded that adults in the church need to set aside their rubrics about young people—they are “unrealistic, naïve, need to wait their turn”—to hear their “clarion call for unity.” 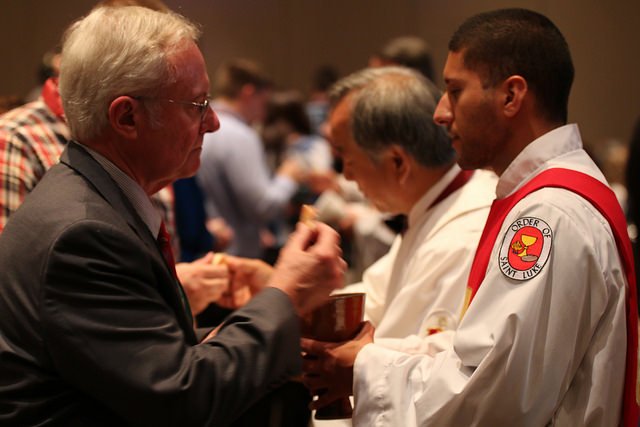 Photo: Communion was part of opening worship at the 2016 North Central Jurisdictional Conference in Peoria, Ill.  Photo by NCJ communicators.

Music was provided by a team of laity and clergy from the Illinois Great Rivers Conference. The team, led by Rev. Eric Swanson, LeRoy First UMC, has been meeting since September 2015. “We were able to bring together some very talented and skilled individuals, “said Swanson. “They are a diverse group of clergy, laity, various ages, ethnicity and churches. All of the liturgy that we use today are denominational resources that are not in the Book of Worship or the United Methodist Hymnal. We hope that people will note these resources and use them.” The worship team also is serving as the musicians throughout the North Central Jurisdictional Conference.

Click here for a full transcript of Bishop Keaton’s sermon