Bishop Ough featured in Get Your Spirit in Shape podcast 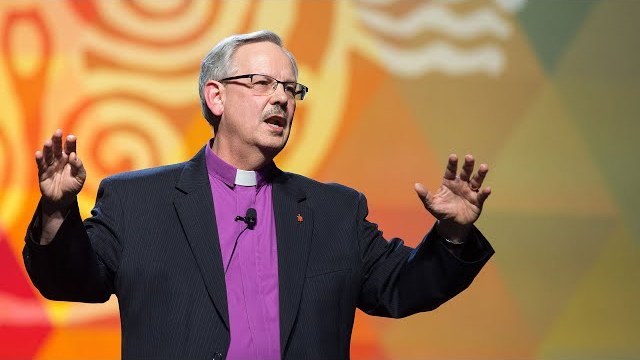 Meet Bishop Bruce Ough: Get Your Spirit in Shape, Ep. 071

Meet Bishop Bruce Ough is the recent episode of the podcast, Get Your Spirit in Shape, hosted by Joe Iovino, of United Methodist Communications. Iovino and Ough spent time discussing the Bishop's ministry and experiences as a leader in The United Methodist Church. Here is a quick look at the interview.

During a youth retreat, his pastor asked a simple question in the stillness of the night. "Bruce," Bishop Ough recalls him asking, "have you ever thought about ministry?" Several years later, in another quiet moment, this time while looking up at the stars, he was struck with a sense of his place in the universe and with God.

I was born in Williston, North Dakota, and spent my entire growing-up years in that northwest corner of the State of North Dakota. You know, it was a pretty isolated environment in many ways. It’s very rural area. And so I grew up by being sort of isolated from a lot of things going on in the world. I realized that much later on, as I went off to college and other places and began to see that, oh my gosh, I was pretty sheltered up here in northwest North Dakota. My father worked for an oil exploration company. Many people are now aware that North Dakota is the second largest oil producer in our country. But even back in the early 1950s there was oil being extracted from that part of the world. And so I actually grew up in the oil fields. In fact, for a while our family lived in an oil camp much like the coal camps in Pennsylvania, you know, where the companies would build camps out in the middle of nowhere, had their residence and their work. So I was shaped by that culture as well as by the farming culture, the agricultural culture of that part of the world. My father grew up on a homestead about 25 miles from where I was born. And so I went back and forth between these worlds of farm life and oil patch.

As the former president of the Council of Bishops shares his journey of faith and ministry, we get a glimpse into our own spiritual lives and the ways God speaks to us in the stillness. What a great reminder for these days of stay-at-home recommendations and quarantines.

Listen to podcast and read a transcript here.
Subscribe to the Get Your Spirit in Shape podcast in Apple Podcasts, Google Podcasts, Spotify, or your favorite podcast app.