The camp on the land of the Standing Rock nation was peaceful and hopeful the day after a federal judge issued an opinion rejecting the Standing Rock Sioux Tribe's efforts to stop construction of the crude oil pipeline that would run from North Dakota to Illinois. 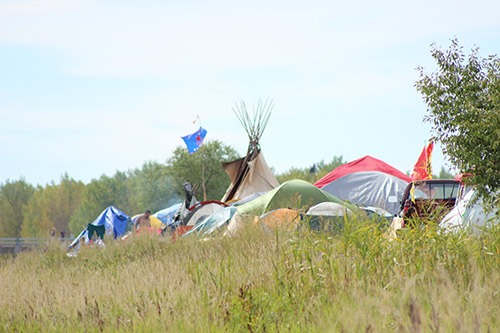 Shortly after the judge’s decision was released, the US Army Corps of Engineers, Justice and Interior departments jointly announced they would stop, at least temporarily, pipeline work under Lake Oahe. The government agencies asked the pipeline company to voluntarily halt construction within 20 miles of Lake Oahe while the Army reconsiders the decision to proceed under the National Environmental Policy Act or other federal laws. Photo: Quiet campsite near the Missouri on Sept. 10th. Photo by David Stucke, Dakotas Conference UMC.

It was unclear if the pipeline's developer, Energy Transfer Partners, would perform work on other sections of the pipeline or comply with the government's request. The company has declined to comment.

The judge’s ruling and the statement from the three federal agencies have offered a glimmer of hope for the Standing Rock nation and other supporters. David Archambault II, chairman of the Standing Rock Sioux Tribe, was quoted in several news outlets as stating a need to continue the efforts at the camps, stand together in solidarity through possible court appeals and monitor the work of the federal agencies as promised in the joint statement.  People are beginning preparations to stay in camp until January 1, 2017. 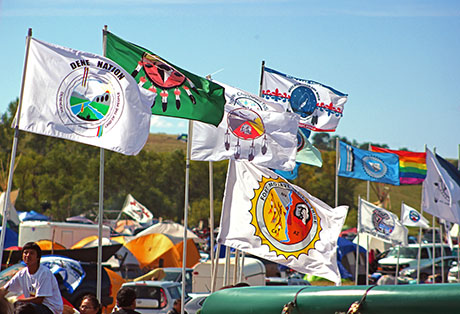 The camp continues to grow each day. Flags of support wave down the main road to the camp. An estimated 250 tribes from around the world have come to share support and unity.  There is a presence from Brazil, Peru, Hawaii, Alaska and more, reported Mike Flowers, director at Spirit Lake Ministry Center. The Spirit Lake Ministry is a mission ministry of the Dakotas Conference and The United Methodist church that reaches out to the people of Spirit Lake nation. Photo: Flags abound at the Oceti Sakowin camp. Photo by David Stucke, Dakotas Conference UMC.

The camp goes by many names, reports Mark Anderson of the Rapid City Journal. “Mni Wiconi is one, Lakota for “Water is Life.” The DAPL Resistance Camp is a more utilitarian label, while others casually call it the Red Warrior Camp, after a contingent of nonviolent activists bivouacked there. On the hand-drawn map at the entrance security checkpoint, it is referred to simply as North Camp, but around the cooking fires and drum circles, it goes by a different name: Oceti Sakowin.” 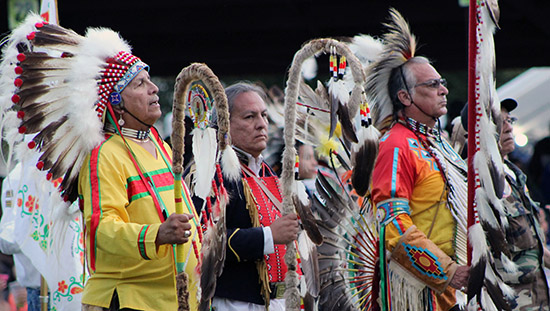 Seven Council Fires, the traditional name of the seven Sioux nations. “The last time this many of those nations stood as one was in 1876 at the Battle of Greasy Grass, otherwise known as the Battle of Little Bighorn, where General George Armstrong Custer and his troops were annihilated,” reported Anderson. Photo: Elders presiding over the grand entry at the United Tribes Pow Wow in Bismarck, ND on Sept. 10. Photo by David Stucke, Dakotas Conference UMC.

The peace pipe that was part of the 1876 Battle of the Little Bighorn was part of a ceremony for peace and forgiveness led by the seven Sioux Nations on Saturday, September 10. Though the fight to protect their land is similar to the fight over the land at Wounded Knee, it is about water for all today.  About 400 people walked an estimated four miles from the main camp to the site where bulldozers have moved the earth for the pipeline.

Several United Methodists have visited and offered support to the Standing Rock nation.

General Board of Church and Society visits Standing Rock 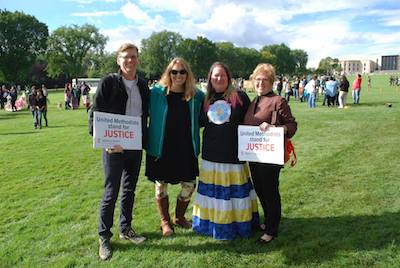 The two participated in the protest in Bismarck, ND on the grounds of the North Dakota state capitol on Friday, September 9. Photo: Susan Henry-Crowe (right), General Secretary of the Board of Church and Society,  with representatives from Bismarck McCabe UMC on the capitol lawn in Bismarck, ND. Photo courtesy of General Board of Church & Society UMC facebook page.

They also visited the peace camp and were present for the peace pipe ritual during a prayer ceremony at the site where earth has been disrupted for the pipeline. The site is a burial ground where it is reported that remains have been disturbed. They also viewed the welcoming of tribes from the Northwest US, who paddled in by canoe and asked to be received on the shores of the Missouri River, and observed the blessing of the camp staff.

"There was a collective awe among those who gathered for how many individuals, communities, tribes and nations joined together in solidarity for what is just,” said Susan Henry-Crowe.  “We were struck by just how prominent prayer and spiritual practice were during the gathering, and I truly felt the presence of God among all of these protectors and justice-seekers."

Bishop Bruce R. Ough, resident bishop of the Dakotas-Minnesota Area, traveled to the site of the large camp to make connections and gain understanding. Fr. John Floberg, rector of Episcopal churches St. James, St. Luke’s and Church of the Cross, on the Standing Rock nation, served as the guide for Ough.

Ough spent time visiting with various people in the encampment on the day after a federal judge’s decision and the Corp’s announcement.

Bishop Ough delivered a message of hope to those present at the camp.

“It is with intentions of unity, peace and hope that I bring you a message of support from the United Methodist Church,” said Ough. “I lift each of you up in prayer and will continue to do so daily. My hope is that you will not let the spirit of this gathering die. The United Methodists hope to work in a continued relationship to fulfill God’s commandment to be stewards of creation, and maintain loving relationships with all of God’s people.”

“I mostly wanted to go and see for myself what is happening, to listen and make connections,” said Ough. “There is no United Methodist presence at Standing Rock.”

Ough grew up in northwest North Dakota amidst the oil fields. His father earned his living working for an oil exploration company. Ough attended a Bureau of Indian Affairs school during his junior high years. After graduating from North Dakota State University, He spent two years living and working on the Standing Rock Reservation.

“I grew to love the Lakota and Dakota people, their spirituality, and their deep respect for God’s creation and creatures. I have a unique history and perspective on the current conflict,” said Ough. 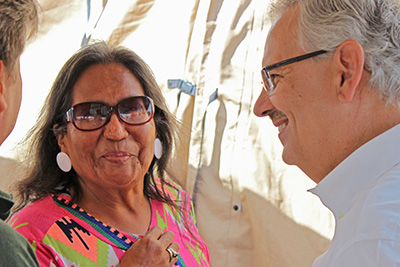 Phyllis Young, member and former councilwoman of the Standing Rock Sioux Tribe, greeted Ough. “It is good to have you here. Thank you for your presence,” said Young. Ough and Young informally discussed the camp and ways to continue the conversation. Photo: Phyllis Young and Bishop Bruce R. Ough at the Oceti Sakowin camp on Sept. 10, 2016. Photo by David Stucke, Dakotas Conference UMC.

Rev. David Wilson, Conference Superintendent of the Oklahoma Indian Missionary Conference of The United Methodist Church has been on the ground at Standing Rock twice in the last month.

“When I first heard about the issues that the Standing Rock nation was facing, I immediately felt called to learn what was going on and how we could help. We are a conference made up of entirely Indian United Methodist churches, the only one like it in this nation. The people at home began asking what is happening and what can we do? I felt like I had to come and find out,” said Wilson. 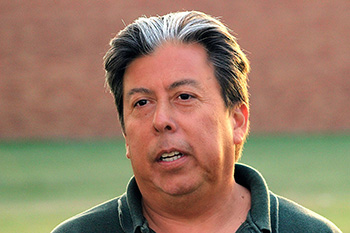 On each visit Wilson has brought people and donations from the Oklahoma Indian Missionary Conference with him, and has worked at connecting others to the people of the Standing Rock Nation, including Ough. Wilson hopes that people will learn more about the issue at hand and about Native American people. Photo: Rev. David Wilson. Photo by David Stucke, Dakotas Conference UMC.

“When people come to Standing Rock they learn so much about the issues, about who we are as indigenous people and how diverse we are,” said Wilson. “There are 200 tribes represented at the peace camp. They are all alike and yet so different. It is my hope that people would find ways to respond, form connections and meaningful relationships.”

Wilson sees the action and support of The United Methodist Church as vital to the integrity of the church.

Other United Methodists in support 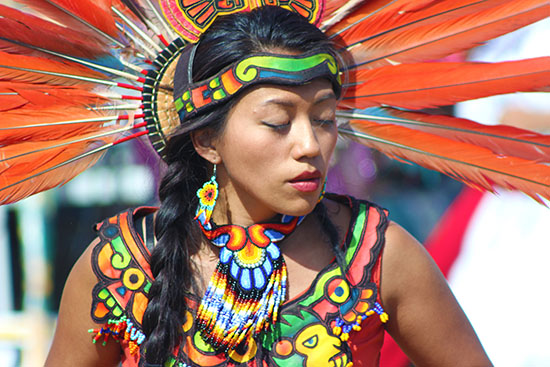 Other annual conferences and individuals have made the journey to Standing Rock, including the Yellowstone Conference and the Dakotas Conference.

JuDee Anderson, a member of Sheridan First UMC, (Sheridan, Wyoming) and the Committee on Native American Ministries for the Yellowstone Conference, came with a team this past weekend to work at the peace camp.  “We are strongly committed to encouraging the church to support this peaceful protection of the land and water and will be working toward this from the Yellowstone Annual Conference. We will be returning to Standing Rock for learning and to support those who are there,” said Anderson. “We have worked with the Sand Creek descendants and we wrote the petition to the General Conference regarding the church and Sand Creek. So coming to the camp at Standing Rock to volunteer is important from our perspective.” Photos: Dancers from the Aztec tribe of Mexico at Oceti Sakowin camp on Sept. 10. Photos by David Stucke, Dakotas Conference UMC. 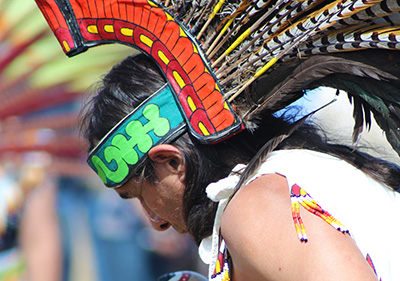 The group from the Yellowstone Conference made the 7-hour trip on Friday, volunteered at the cooking tent on Saturday and then on Sunday returned to Wyoming.

Several other clergy throughout North and South Dakota have visited the camp and provided support.   Rev. Lou

There are reports of individuals from the Great Plains Conference and North Carolina Conference of The United Methodist Church who have been at the peace camp as well.

“We know that many Native people who may or may not be directly connected with The United Methodist Church, from several conferences, have made their way to Standing Rock,” said Wilson.

“There are several ways to respond,” said Wilson. “One is to visit and volunteer at the camp. Another way is contributing financially through the Dakotas Conference and the Oklahoma Indian Missionary Conference. The infrastructure of the camp is costing $1,500 to $1,800 a day.”

Donations to the Dakotas Conference will be channeled to supplies and hands-on support needed at the peace camp on Standing Rock. Funds can be sent to Dakotas Conference, PO Box 460, Mitchell, SD 57301 or can be made online. Make sure to write “Standing Rock” in the memo.  Mike and Libby Flowers, directors at Spirit Lake Ministry Center will coordinate the purchase and deliver of needed supplies.

Financial donations for general operations, legal fees and other expenses can be directed to the Oklahoma Indian Missionary Conference, 602 SW 35th Street, Oklahoma City, OK 73109, or can be made online.  Make sure to indicate “Standing Rock” when making a donation.

One of the significant ways United Methodists can respond is to grow in understanding and connection with all Native people.

“I pray that we may grow in our understanding and connections, and grow in a love for our neighbors of the Standing Rock nation and all Native American people across the Dakotas and the world,” said Bishop Ough.

“May we as United Methodists join with all those praying for justice and standing for a peaceful path forward that protects God’s people and God’s planet, “ said Susan Henry-Crowe in a recent news release.

The work of connection and relationship has begun and will take a continued, enduring effort for United Methodists in the Dakotas and beyond.

“I want to say how thankful I am for Bishop Ough, Susan Henry-Crowe and others who have come here, to learn about what is happening, to listen and to be present. That has meant so much to the people here at Standing Rock. That is a great start to a relationship with the people of Standing Rock and beyond. This has been a great week for the United Methodist presence,” said Wilson.