If you live in the North Central Jurisdiction (NCJ), you might have noticed that there was no shortage of ways to learn about what was happening at the 2016 Jurisdictional Conference. You could tune in via live streaming, read articles, watch videos, listen to podcasts, or check out frequent social media posts with the latest news.

The extensive coverage was thanks to a first-of-its-kind collaboration among the jurisdiction’s communicators, who pooled their gifts, resources, and time to collectively provide the best possible coverage to their 11 annual conferences—representing a vast departure from the siloed approach that each conference has historically employed.

The idea to partner emerged at the end of the 2012 North Central Jurisdictional Conference, where each conference handled its own communications.

“I realized we were all trying to do the same thing,” said Rick Wolcott Jr., director of communications for the East Ohio Conference. “If we had talked ahead of time, we could have divvied up assignments and helped each other.”

So Wolcott and several other NCJ communicators came up with a plan, and their counterparts across the jurisdiction immediately jumped on board.

Communicators convened in Peoria in October to take a tour of the convention center where Jurisdictional Conference would take place—and to coordinate coverage. Those who specialize in writing, photography, video production and editing, audio stories, and social media strategy were identified and agreed to take on specific relating to their specific gifts. Each person’s contributions would be shared with other communicators and conferences. 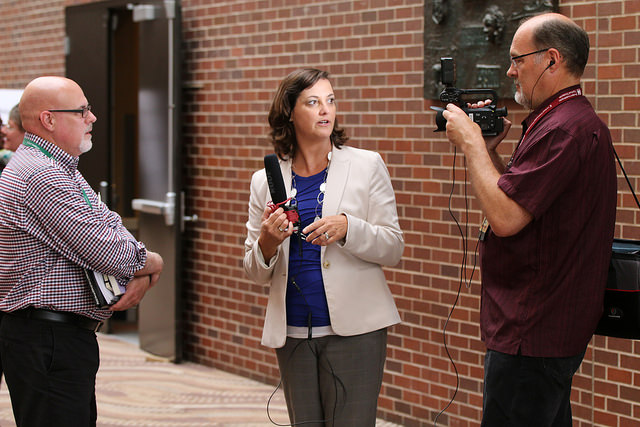 Dakotas Conference communicators Dave Stucke and Doreen Gosmire collaborated by producing over eight video pieces.  The Dakotas Conference provided two tri-casters for live streaming and assisted in the capturing of video from worship and plenary sessions.  Stucke served as the Technical Director for all of the worship services including the Consecration Service for new bishops. Gosmire wrote several articles and spent time managing the production of the video pieces.

“The United Methodist Church is connectional,” said Wolcott. “We’re trying to model that connection. It’s a work in progress, but the idea is that together we can offer more than if we were working by ourselves.”

Wolcott, who spent 14 years at a TV station and about half of them as an assignment editor, agreed to be news director. At 8:30 a.m. each morning during NCJ, he led a meeting for communicators to discuss the day’s agenda and decide which person would cover which event using which media.

Communicators shared their ideas and their finished products through digital collaboration tools like Dropbox, Slack, and Flickr.

The approach allowed each conference to share more coverage more quickly, to use more media, and to benefit from a significantly broader skill set.

For Skyler Nimmons, communications director for the Indiana Conference, collaborating is a way to provide more robust coverage to the United Methodists in his state.

“I couldn’t provide the breadth and depth of coverage alone that we can offer together,” said Nimmons, who worked on video recaps from NCJ. “And there are so many moving pieces, especially in today’s world with social media, video, and catching every picture. At events like this, it becomes really difficult to manage all of those things. For me, collaborating helped keep all the pieces together.”

Nimmons has been to the Southeastern Jurisdictional Conference three times, twice as a delegate and once as a communicator. He said the NCJ’s collaborative approach is a model that other jurisdictions might want to adopt.

“The level of coverage is infinitely better because it’s not just me writing and telling the story in Skyler’s way,” he said. “We’re sharing stories in multiple ways from multiple voices. How true is that to the church—there’s more than one voice to share and many ways to connect people to our stories.”

The jurisdiction’s communicators say the collaboration will continue beyond 2016, and they’re committed to using this new partnership model as a foundation for additional sharing of ideas and best practices.

“There’s a lot of talent in our jurisdiction and a lot of innovation that colleagues are introducing to the rest of us across the jurisdiction,” said Wolcott. “We are all being challenged in new ways. It’s wonderful to be part of a team of talented people.”